Thirtieth anniversary of the fall of communism in Romania

This is a modified excerpt from our podcast DLIFLC Lingo. You can hear the entire story by going to www.dliflc.edu and clicking on the podcast photo or you can go to www.soundcloud.com/dliflc

Thirty years ago on Dec. 25, Romanian dictator Nikolai Ceausescu and his wife Elena were executed by firing squad abruptly ending the communist regime. The event was the culmination of startlingly bloody revolution that had begun just nine days earlier. 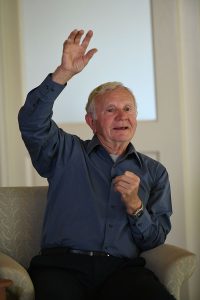 Two-time DLIFLC graduate, retired Col. Branko Marinovich, was a foreign area officer at the American Embassy in Bucharest at the time.

“I got there in the summer of 1989. Of course six months later is when everything went up in flames… somebody had asked me earlier, ‘Was this a surprise?’ Yes it was. At least, everybody in the Embassy was totally surprised.”

It all started on Dec. 16 in Timisoara, a town nearly 350 miles North West of the capital. An anti-government crowd had gathered to rally behind a priest who was about to get deported because of his sermons critical of Ceausescu.

“Timișoara was the first place it broke down,” Marinovich explained, “because a dissident priest started, on the pulpit, talking about freedom, independence and human dignity. And then Ceaușescu’s secret police started harassing and threatening him.” 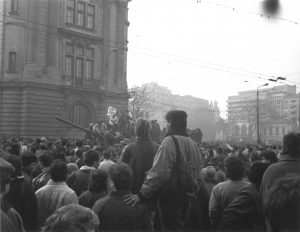 The protest started as a way to protect the priest but as the day wore on, it became a protest against the Romanian government’s extreme austerity and repression measures.

The communist regime under Ceausescu had become totalitarian. It was one of the most repressive regimes in the Eastern Bloc at that time. It was so bad that even Soviet leader Mikhail Gorbachev described it as, “a horse being whipped and driven by a cruel rider.”
“Life in Romania, for the Romania people was dire,” said Marinovich.

People waited in long lines for everything, thanks to the export of most of the country’s manufactured and natural products, from agriculture to industrial goods. This not only meant food shortages, but also items need for everyday living such as clothing, electricity and healthcare – basic necessities. Rationing began in the early 80s and lasted for years.

“There wasn’t that much left for the remaining people,” he said “The heat and lights were turned off early evening and didn’t come back on till the morning. Like I said, the food was very seasonal and in short supply. So that’s the Romanian people, they really suffered.”

The people were also forced to work long hours for dismal pay. On top of all that, there was Ceausescu’s personal army, the Securitate, which instilled incredible fear into the people.
“They were the ones who kept the population in line,” Marinovich said. “Phones were tapped, conversations were overheard. At their headquarters, they had these big banks where they could tap phones and listen to conversations.”

Fear, exhaustion and poverty ignited the protests in Timisoara. The Securitate and the Army responded with violence. Over 60 people died in the protests, but reports from Radio Free Europe reported many hundreds to even thousand killed.

World spread fast throughout an information deprived Romania. The violence in Timisoara became a rallying cry of the revolution. 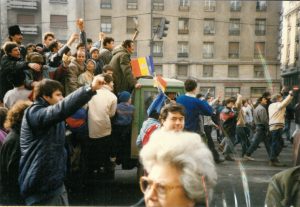 By the time Ceauscecu attempted to give a unifying speech Dec. 21 to 100,000 people in the heart of Bucharest, the unrest was palpable. Two minutes into his speech, the crowds began to boo and jeer. It was unthinkable for Ceausescu, who had used his brutal totalitarian regime to keep people in line. The speech was broadcast live, which meant that despite efforts of the censors, evidence of just how deep the unrest went was now out in the open.

“He’s giving his speech and this roar in the crowd disturbed him to the point that he stuttered. For the first time he stuttered, he didn’t know what was going on,” Marinovich said. “Then he asked for quiet, but there was no quiet and then he thought the audio was out. He kept saying ‘hello, hello.’”

Ceausescu’s second attempt to give a speech the following day was a failure. He and his wife fled by helicopter to escape the mob that had stormed their building. 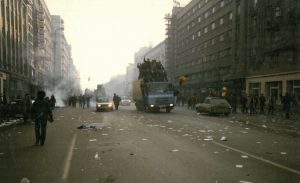 Revolt in Bucharest against the communist regime. – Photo courtesy of Col. Marinovich (Ret.)

Marinovich, meanwhile, as a FAO, had to gather information to send back to the U.S. With that in mind, he ventured out into the chaotic streets of Bucharest.

“There were tanks in the streets, there were dead bodies around, shots everywhere. I had my staff car and I had an American flag that I put on the antenna, because I felt like the Americans still looked like the good guys… They knew what side we were on. The only danger was if one of Ceausescu’s security forces saw me… they would wipe me out, but I took that chance.

In my staff car, my driver and I went around to find out what was going on…And right in the central square of Bucharest … some of these protestors stopped the car and asked me to roll down the window. They said, ‘We’ve got two wounded people, we want you to transport them to the hospital.’ So, I said, ‘Sure.’ We opened the door and, before they got into the car, they had both died. So those are the things that kind of stay in your mind.”