The Marine Corps Detachment at the Presidio of Monterey carried out a change of command June 12, in which Lt. Col. Jason Schermerhorn relinquished command to Lt. Col. Timothy Mayer, who will be taking charge of Marines who are studying a foreign language at the Defense Language Institute Foreign Language Center. 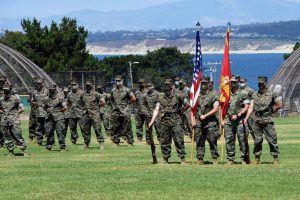 Using social distancing, some 300 Marines in formation with masks donned stood on Soldier Field during the ceremony, reminding participants and guests that the era of the COVID-19 pandemic has not subsided.

“Thank you for being here today! For some of us, today’s ceremony is the first large event we’ve attended since COVID-19 became a real threat,” said outgoing commander Schermerhorn.

Due to the pandemic, the presiding officer, Col. Derek Lane, commanding officer of the Marine Corps Communication-Electronics School headquartered in Twentynine Palms, California was not able to attend, but sent a letter.

“Your ability to also command, control, and take care of the Marines not only at DLI, but also at the Naval Post Graduate School, highlights your ability to lead an expansive, diverse command while ensuring mission accomplishment in every regard,” said Lane, in the letter read by Sgt. Ryan McGuinness. 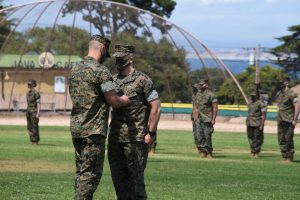 Schermerhorn assumed command of the Marine Corps Detachment, Monterey, in June of 2018. While thanking his own Marines and academic leadership for their hard work, Schermerhorn singled out DLIFLC Army leadership.

“I thank all of you for your commitment to the mission and all the service members,” said Schermerhorn. “One thing that really sticks with me is that Col. [Gary] Hausman and Command Sgt. Maj. [Thomas] Donehue really look at our Marines as if they are their responsibility as much as a Soldier in the 229th [Military Intelligence Battalion],” he said.

“I am very fortunate to follow Lt. Col. Schermerhorn’s leadership and the positive forward momentum that this command has been taking,” said incoming commander Mayer, who served with Schermerhorn before.

“But for the Marines out there, we’ve got a lot of responsibilities and work to complete,” he said, adding that “There are challenging times ahead for our nation…and your role to our national defense is crucial.”

Mayer came to DLIFLC from the 24th Marine Expeditionary Unit, North Carolina, where he served as a senior ground intelligence officer. Mayer has most recently supported civilian authorities’ operations in Puerto Rico and worked as a part of an Africa crisis response team while stationed in Moron, Spain. His experience with deployment and tactical employment of ground reconnaissance units allows him a unique understanding of the Marine linguist.

Due to his successful leadership of Marines at DLIFLC, Marine officers attending the neighboring Naval Postgraduate School and two units at Naval Air Station Lemoore, Schermerhorn was selected to attend the Joint Advanced Warfighting School in Norfolk, Virginia where he will complete a years-long, rigorous study to become an expert joint campaign planning. He received the Meritorious Service Medal for his actions during his time at the Presidio of Monterey.

*** You can see the recording of the entire event on our YouTube page: https://youtu.be/dViGRZRHFns?t=3010