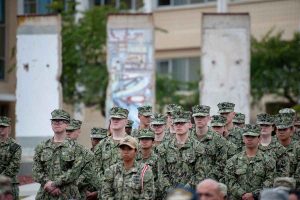 Navy language students stand in formation in front of pieces of the Berlin Wall.

“It is truly an honor to be here as we come together as Americans to honor our nation’s veterans. This place is very special to me and my fellow DLI graduates who join us here today to honor those who have served our nation in uniform,” said guest speaker, retired Maj. Gen. James Adkins, who traveled from Maryland for the occasion with several of his ’76 classmates.

Adkins, also a DLIFLC Hall of Fame inductee, spoke of history, commemorating the fallen on the 11th hour of the 11th day of the 11th month, but reminded the audience that “those who serve today stand as tall as any generation of patriots that went before them.”

“There is no higher form of citizenship than service to our nation in uniform. For those here today who served in peace and in war, I thank you and our nation thanks you for that service,” he said. “For those who served here at the Presidio, we are thankful that our service brought us to this special place. One cannot help but love the tremendous beauty all around us here on the Monterey Peninsula.”

This year, the institute broadened its Veterans Day ceremony to include a tour of the Presidio of Monterey for alumni and guests that included a social coffee hour with students and faculty prior to the ceremony. 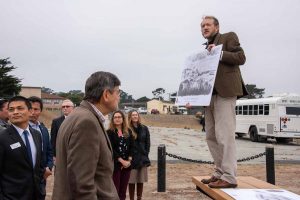 “I’m always happy to talk about the Presidio’s historic fortifications and monuments to veterans, especially former DLI students – most of them probably didn’t have a lot of time back then to dabble in history while struggling to learn Chinese or Russian,” said Command Historian Cameron Binkley, who gave a tour to some 30 participants from the bottom of the Presidio’s Sloat Monument and Soldier Field, to the top of the campus, bordering Pacific Grove where new dorms have been constructed.

DLIFLC provides resident instruction in 16 languages at the Presidio of Monterey, California, with the capacity to instruct another 65 languages in Washington, D.C. The institute has graduated more than 230,000 linguists since 1941.

In addition, multiple language training detachments exist at sites in the U.S., Europe, Hawaii and Korea, spanning all the U.S. geographic combatant commands in support of the total force.