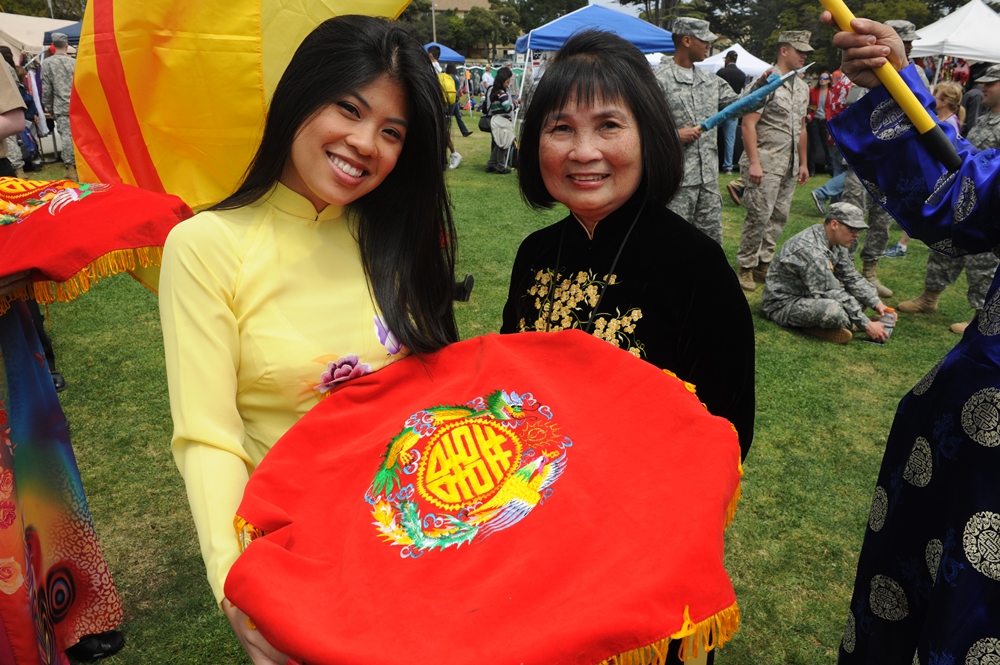 Margarita Thao Nguyen (right), a Vietnamese teacher in the Defense Language Institute Foreign Language Center Continuing Education Directorate, along with her daughter wears Vietnamese traditional clothes on Language Day May 8. Nguyen, who escaped from Saigon in 1975, took part in a ceremony to honor Vietnam War veterans on Language Day as the U.S. commemorates the 50th anniversary of the war. (Photo by Patrick Bray, DLIFLC Public Affairs)

MONTEREY, Calif. – Every year on Language Day at the Defense Language Institute Foreign Language Center Margarita Thao Nguyen, a Vietnamese teacher in the institute’s Continuing Education Directorate, participates by wearing traditional Vietnamese clothes and sharing her knowledge of the culture of Vietnam. This year she took part in a ceremony that honored veterans of the Vietnam conflict as the U.S. commemorates the 50th anniversary of the war.

The war forced Nguyen to flee her home country and start anew in America when she was 27 years old. Even though coming to the U.S. put her out of danger from the communists, she still had to adapt to living in another country.

Her journey would be long, but eventually she became a much-loved instructor at DLIFLC. 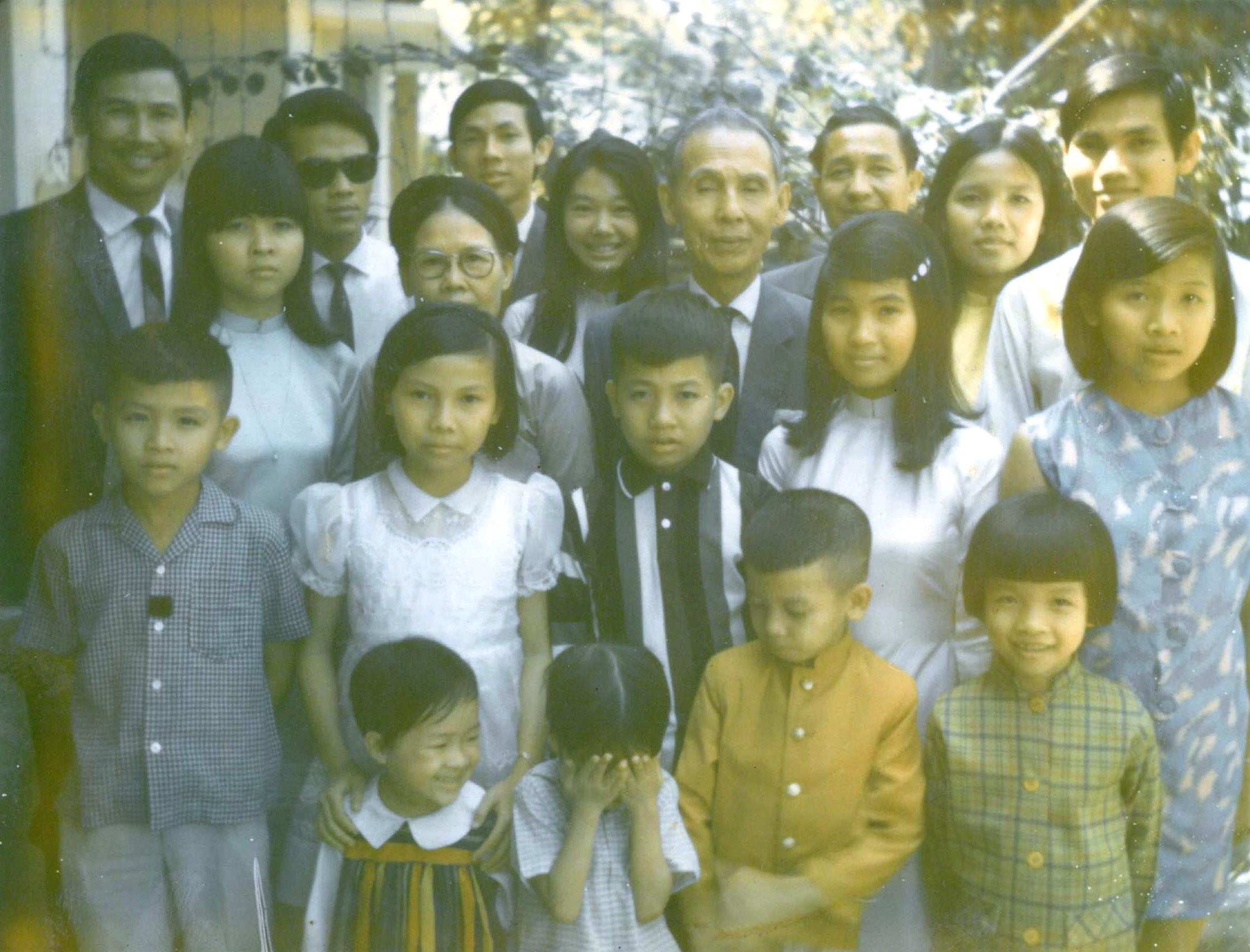 Nguyen was born in the northern part of Vietnam, but when the country was partitioned in 1954 she moved to Saigon with her parents where she grew up. As a five-year-old at the time, her only memory is getting sick on the boat as the family traveled south.

Prior to 1975, it could be said that Saigon was relatively calm and stable throughout the Vietnam War, aside from a few skirmishes and the 1968 Battle of Saigon. However, for most residents, the war was something that was fought in the countryside, not the city. Life in Saigon was very normal for Nguyen and her 12 siblings as she was growing up. She had the opportunity to go to school and even had a job when she entered adulthood.

Nguyen’s father was a high school teacher and encouraged her to get an education. She would have preferred to be a nun to show her devotion to her Catholic faith, but she honored her father’s wishes and went to college and then worked for the Ministry of Education. She still had hopes that someday she would be a nun, so she continued to volunteer and help others in Saigon until the day came when she had to leave.

Nguyen’s parents escaped the communists three times. Once in 1948 before she was born. Again in 1954 when Vietnam was split and the family fled to the south. In April 1975, they would have to go through this ordeal again. This time it would be more difficult as the family was now larger, Nguyen’s parents were older, and in the chaos leading up to the fall of Saigon passage out of the country appeared impossible. Nevertheless, the family would try their escape again.

“We didn’t know what the future held,” said Nguyen. “My father said we would take our chances on the boat. He said he would rather die in the ocean than stay in communist Saigon.”

The family attempted to board a ship out of Vung Tau, just south of Saigon, but the communists were already in the area. So, they returned home to Saigon.

“After that my brother came and said we should try to go to the airport,” said Nguyen. “We went there and had to fight through the crowd because there were so many people trying to get out.”

The Nguyen family was able to board a Chinook helicopter bound for Guam, but the family then became separated. Nguyen’s older brother was a colonel in the South Vietnamese Army and he stayed behind to fight the communists. He would escape almost at the last minute on one of the last flights out.

Passage to Guam was not easy. The uncertainty only added to their suffering. In Guam there were rumors amongst the refugees as to where they would end up. One rumor circulating said that they would be placed on an island in the Pacific to live out the rest of their days. No one knew what the future held.

Contrary to all the rumors they were only in Guam for 10 days before being flown to the U.S.

“They put us on an airplane, but we did not know where we were going,” said Nguyen.

Four refugee centers were established by the U.S. Government in 1975 under Indochinese resettlement, or Operation New Life. Nguyen arrived at one of the camps at Fort Chaffee, Arkansas, but was separated from her mother and brothers and did not know where they were. Eventually her brother, the colonel, and another brother arrived in the camp. Both had previously studied at the Naval Postgraduate School in 1956 and had very good command of the English language. So, they began to work in the camp headquarters. Through this position they were able to locate and find Nguyen’s mother. She was evacuated to Camp Pendleton, California. 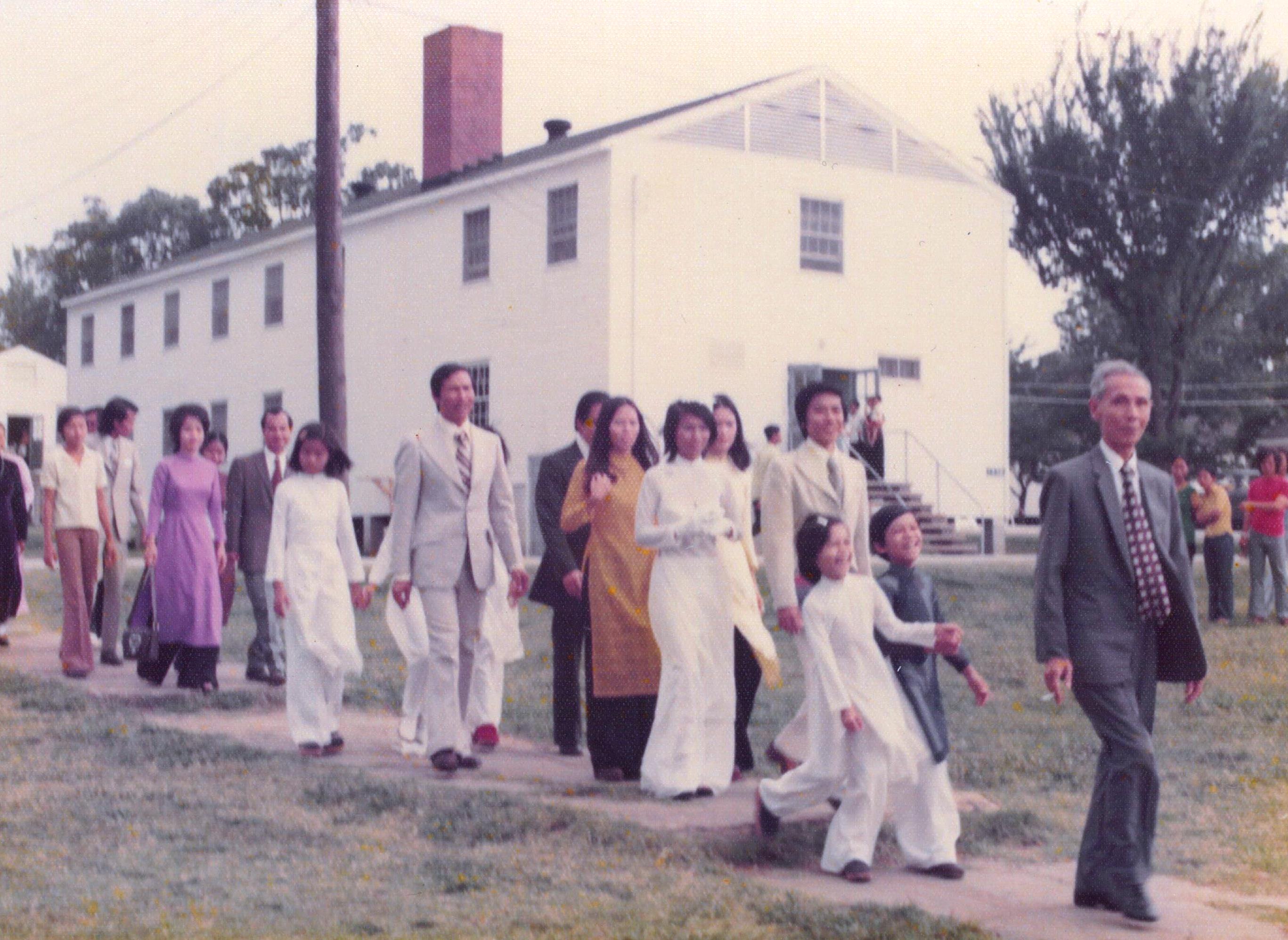 In the refugee camps the Vietnamese were slowly integrated into the U.S. As political refugees, they were granted permanent legal residence in the U.S., but Nguyen held onto her deep cultural roots and felt that she needed a husband before she could go on to start a new life in the U.S. She lived at Fort Chaffee for three months before she married another Vietnamese refugee whom she only knew two months prior to the fall of Saigon.

“I never planned to marry. All my life I wanted to be a Catholic nun,” said Nguyen. “So, in this situation I married because of what happened to my country. I never knew him well, but he promised to take care of my father who was 75 at the time and spoke French.”

Together, they would settle in Texas. Their only possessions would be things given to them at the refugee camp.

“It was very hard for me. I had to start from the beginning, but I had a foundation in English so I could survive,” said Nguyen. 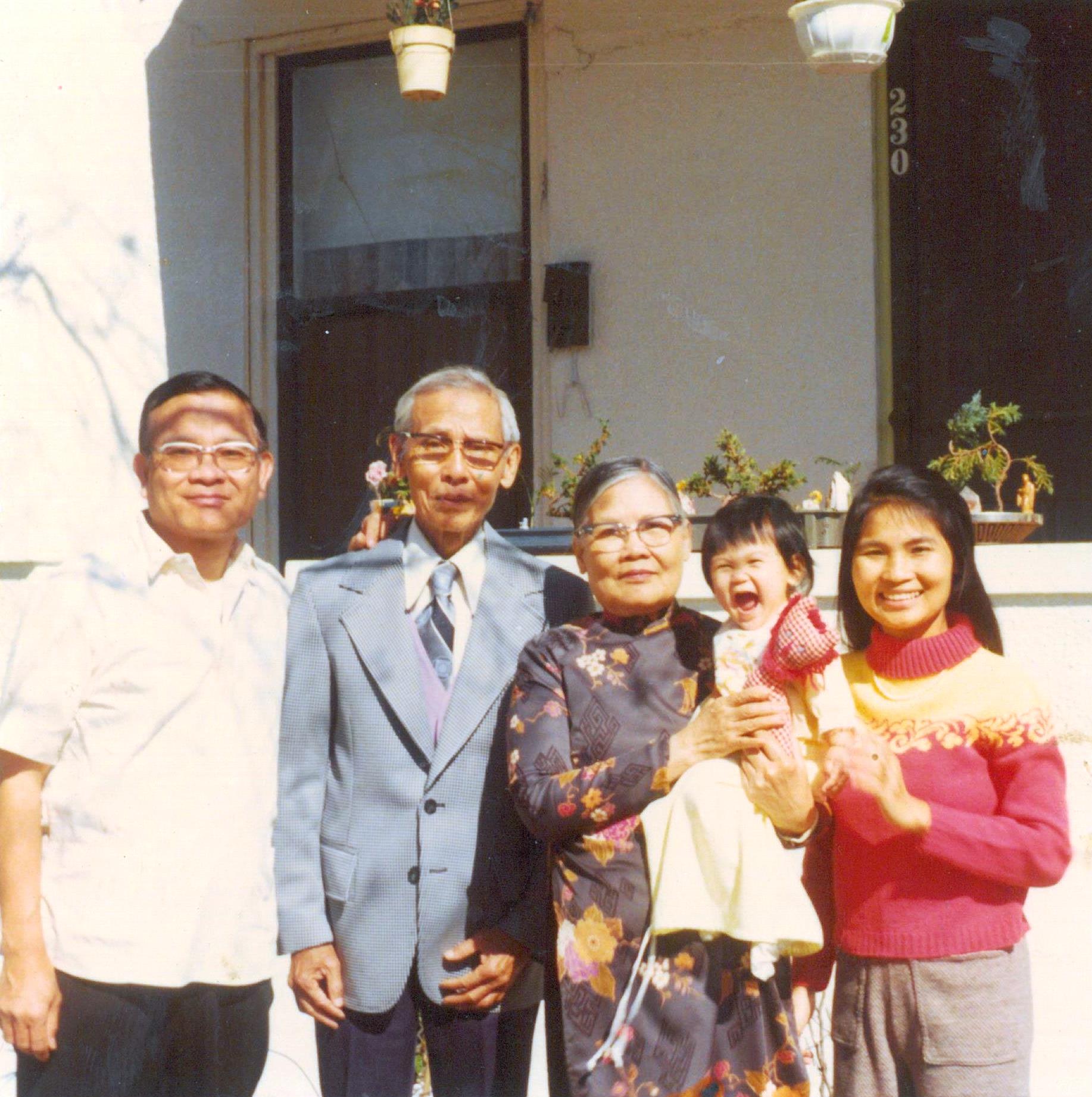 Margarita Thao Nguyen (right) and her family settled in Texas after arriving in the U.S. in 1975. Nguyen devoted her time to serving and helping others through volunteerism. She helped out in the local Vietnamese community, doing anything that she could. (Photo provided by Margarita Thao Nguyen, DLIFLC)

Just like in Saigon, Nguyen also devoted her time to serving and helping others through volunteerism. She helped out in the local Vietnamese community doing anything that she could.

In 1988, mostly because of her brother’s previous experience in Monterey at the Naval Postgraduate School, Nguyen and her family left Texas for the Monterey area.

In Monterey she continued her service to the Vietnamese community and even got a new job in the local school district. She applied to work at DLIFLC in 1992. After a long wait, she was accepted as a Vietnamese instructor in 1994.

Nguyen became a teacher in the Vietnamese resident course where she became well-loved among the faculty and staff. Unfortunately, defense spending cuts in 1997 forced the institute to let Nguyen go. She was rehired in 1998 and during her year off she studied computers at Monterey Peninsula College. This proved advantageous to her because in 2003 DLIFLC closed the Vietnamese department, but retained Nguyen in the Continuing Education Directorate because of her computer skills. Today, she uses technology to conduct video tele-training whereby she interacts with students anywhere in the world. 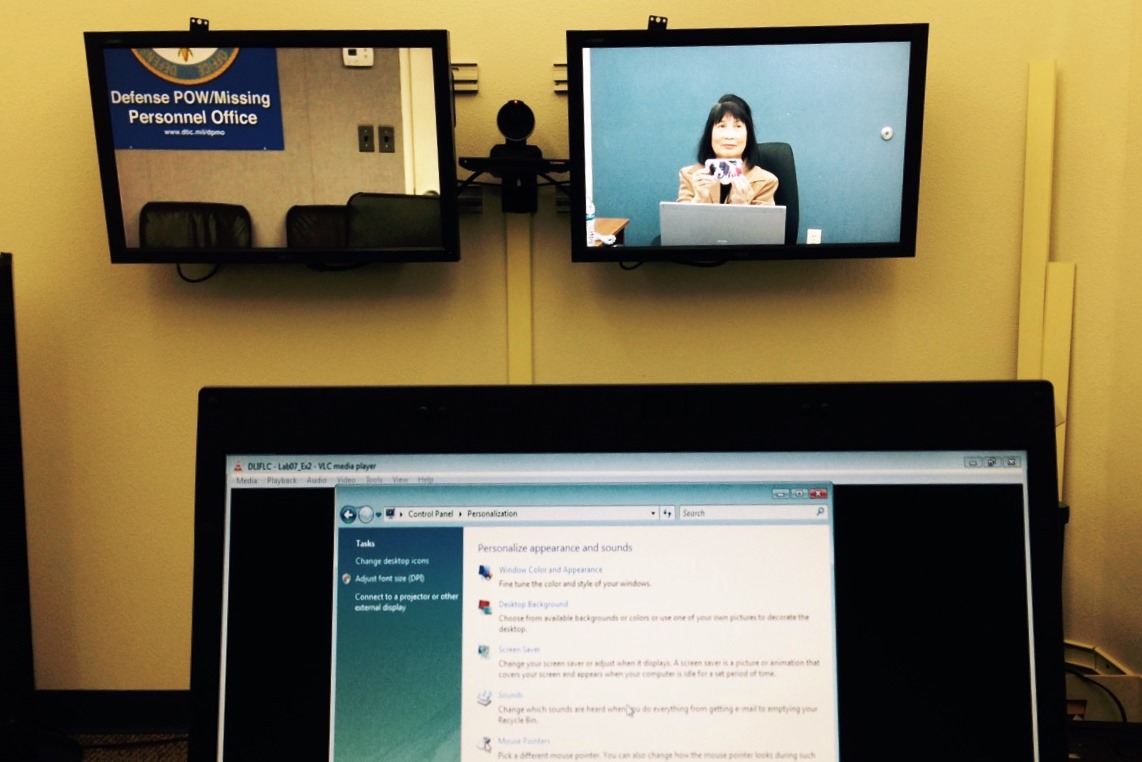 Margarita Thao Nguyen takes a photo of herself as she sets up her video tele-training system at the Defense Language Institute Foreign Language Center Continuing Education Directorate. Nguyen escaped from Saigon in 1975 and resettled in the U.S. before making her way to DLIFLC in Monterey, California. (Photo provided by Margarita Thao Nguyen, DLIFLC)

Nguyen’s coworkers and students enjoy her cheerful personality. Her former students who come back to DLIFLC to study another language always meet with her to brush up on their Vietnamese.

Language Day is one of her favorite things about working at DLIFLC. This year, Nguyen helped organize a traditional Vietnamese wedding song performance.

This year, DLIFLC organized a special salute to Vietnam War Veterans during Language Day festivities. Together with more than 65 Vietnam Vets, Nguyen stood proudly among them, thankful to the veterans and the country that welcomed her 40 years ago. 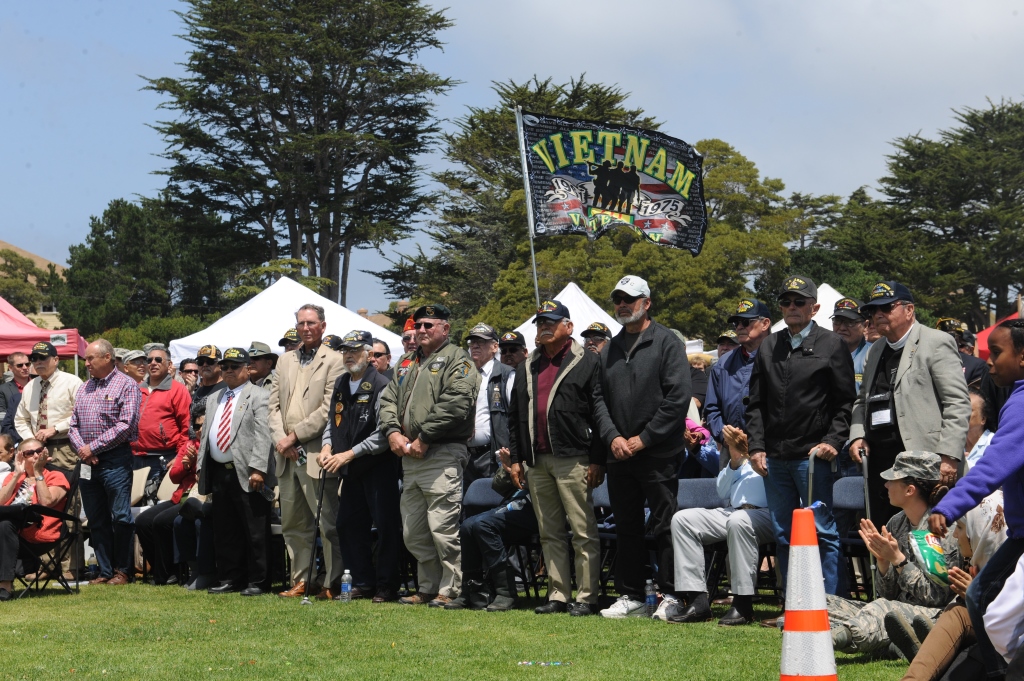